Bespoke suits – why less is more 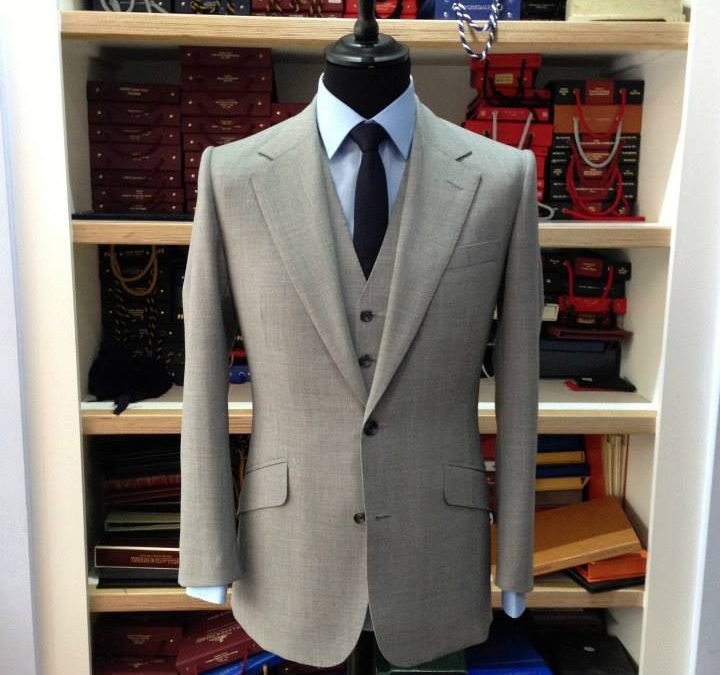 The design commonplace “less is more” has a relevance when it comes to clothes. For a man first overcoming his natural reluctance to draw attention to himself the discovery that it’s possible for a peacock to extend his wings without the sky falling in is an exciting one. To a man who’s only ever worn navy or charcoal coloured suits the range of expression offered by loud tweeds is tempting and exhilarating. However, there is a respectable viewpoint that holds that expanding one’s sartorial boundaries is subject to the law of diminishing returns.

The louder the outfit the bigger the wearer’s personality must be, otherwise a man’s clothes will talk over him. It’s easy to increase the size of the patterns on your jacket, but far harder to correspondingly scale up your levels of charisma. Also, such clothes are far harder to wear in a professional context, because however much you enjoy dressing up there are few jobs outside the entertainment industry where a reputation as a clothes-horse will be advantageous. And finally, a taste for loud suits demands a big wardrobe, because no one wants to arrive at a party, or a dinner, to be met with, “Oh, you’re wearing that suit again!”

A couple of men personify the allure of simple dress. In September 1960 Esquire magazine in America published a very long “best dressed” list written, over a period of years, by the journalist George Frazier. While he was too classy to rank the men on the list he did single out diplomat AJ Drexel Biddle, saying “it would be something of a task to find a man more elegant than he.” Images of Biddle invariably show him, except on the occasion when he was fleeing war-torn Poland, in a dark suit, a white shirt and a dark tie.

Another role model is Prince Philip who, thanks to taste levels so high they’re almost imperceptible, has ensured that over the eight decades he’s been married to the Queen his clothes have never been the subject of any attention. Both Biddle and Prince Philip achieved this perfection by only wearing well fitting suits and jackets in sober colours and cuts, eschewing fashion in search of what’s flattering and stylish, and staying in shape. Both men are notable for the way they retained their figure, an achievement that further demonstrates the that way restraint benefits a man’s appearance.