Chris suggested we go for a modern interpretation of the cut, still with pleated trousers, but slightly narrower in the leg and lower waisted with a marginally more fitted jacket than the original. This will mean I can wear the suit day to day, without looking like I’m auditioning for a period drama.

For the details of the suit – the buttons, pockets lapels etc., it’s possible to remain completely faithful to NBNW, though spotting these elements took a bit of time. I basically had to watch the film from start to finish, taking screen shots of the frames where the suit details were shown. This is what I found out: 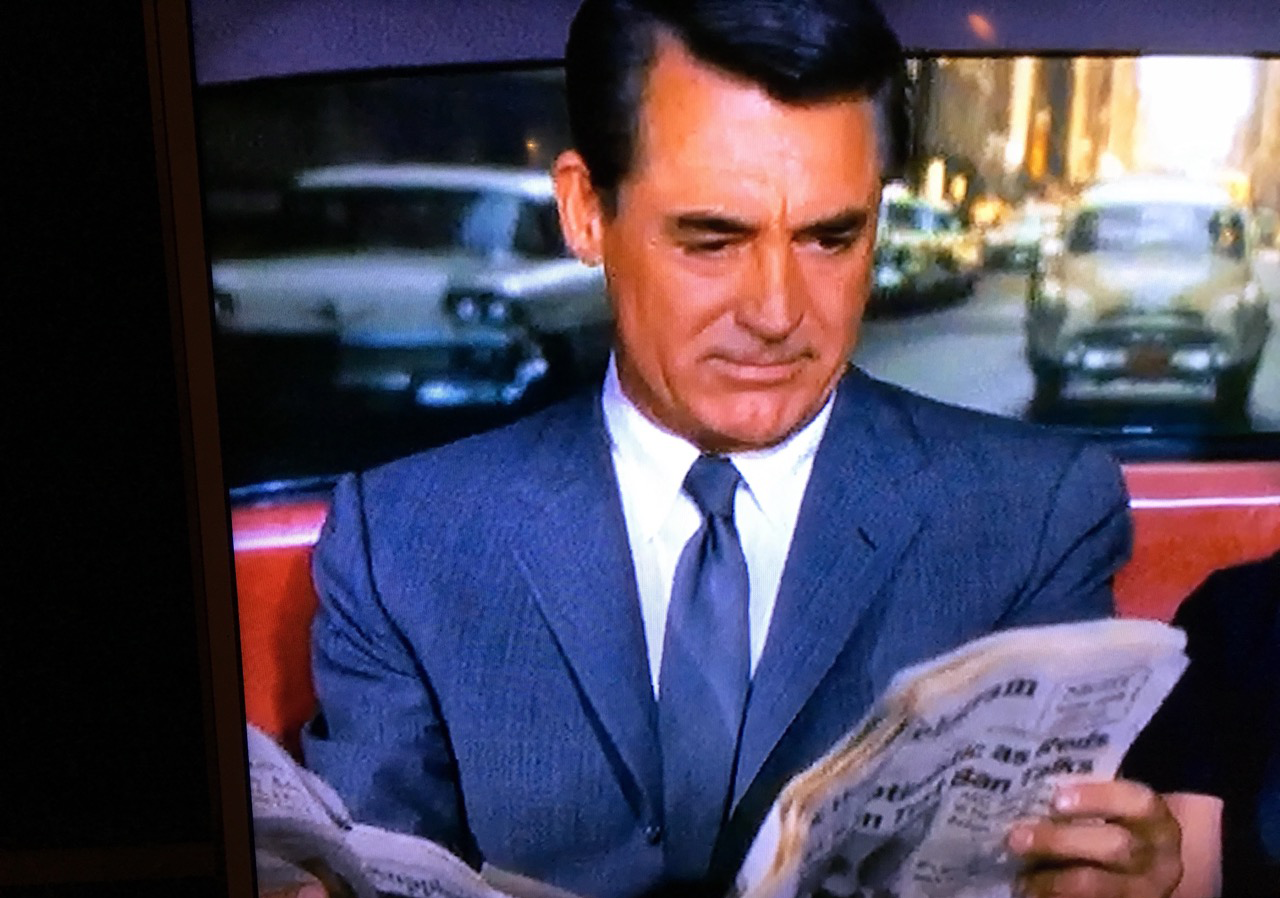 The lapels are a fairly narrow notch style that wouldn’t look out of place on a modern suit. There’s a straight medium length lapel hole, again of a type we’d recognise today. 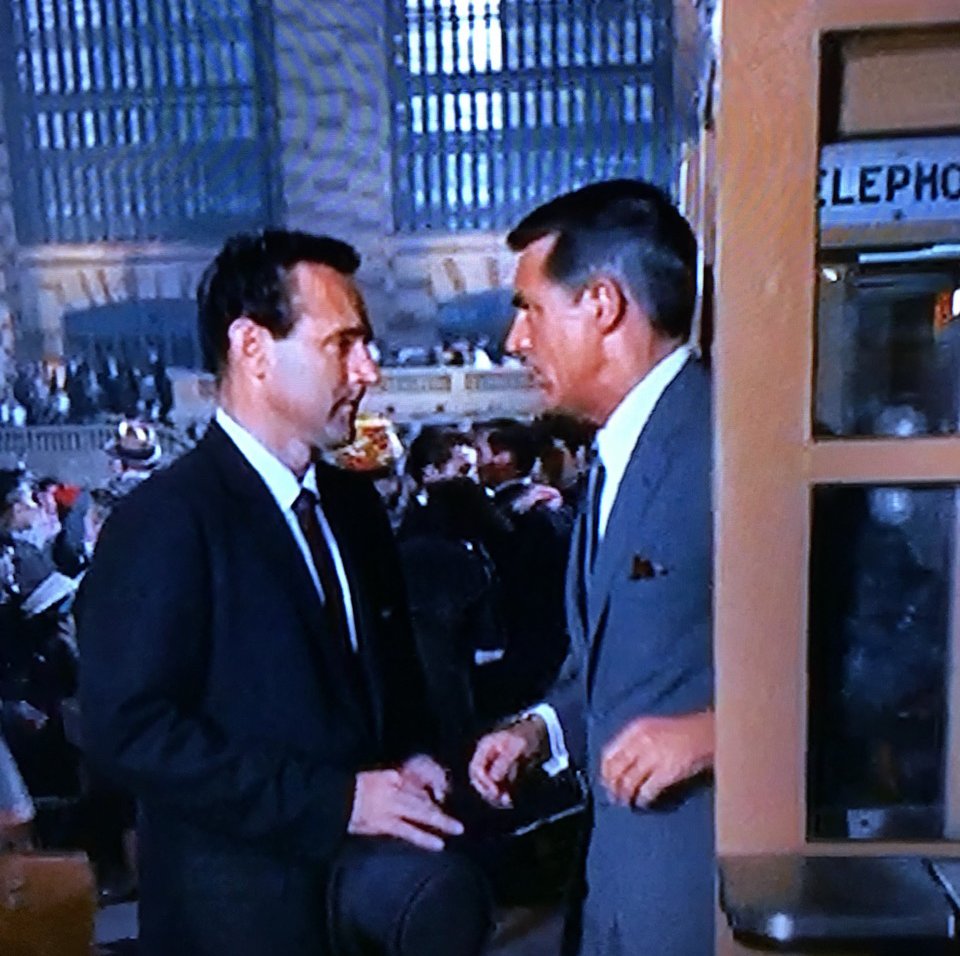 The breast pocket is hard to spot at first as Grant doesn’t sport a handkerchief, but later in the film, when he’s on the run from the police, we see him emerging from a telephone box at Grand Central Station with a pair of tortoiseshell sunglasses tucked into a breast pocket on the left side.

The jacket has an unusual ‘button two, show one’ construction, with the top ‘show button’ essentially for decoration (also known in the US as a 3-roll-2) allowing an elegant roll into the functional middle button (a sure sign of a handmade suit as no machine can recreate this cut).

On the sleeves there are three buttons – as opposed to the standard (then and today) of four buttons.

There are two jetted pockets (no flaps) on the jacket, two side slanted front pockets on the trousers, and one jetted pocket (with no button) on the right hand trouser rear. 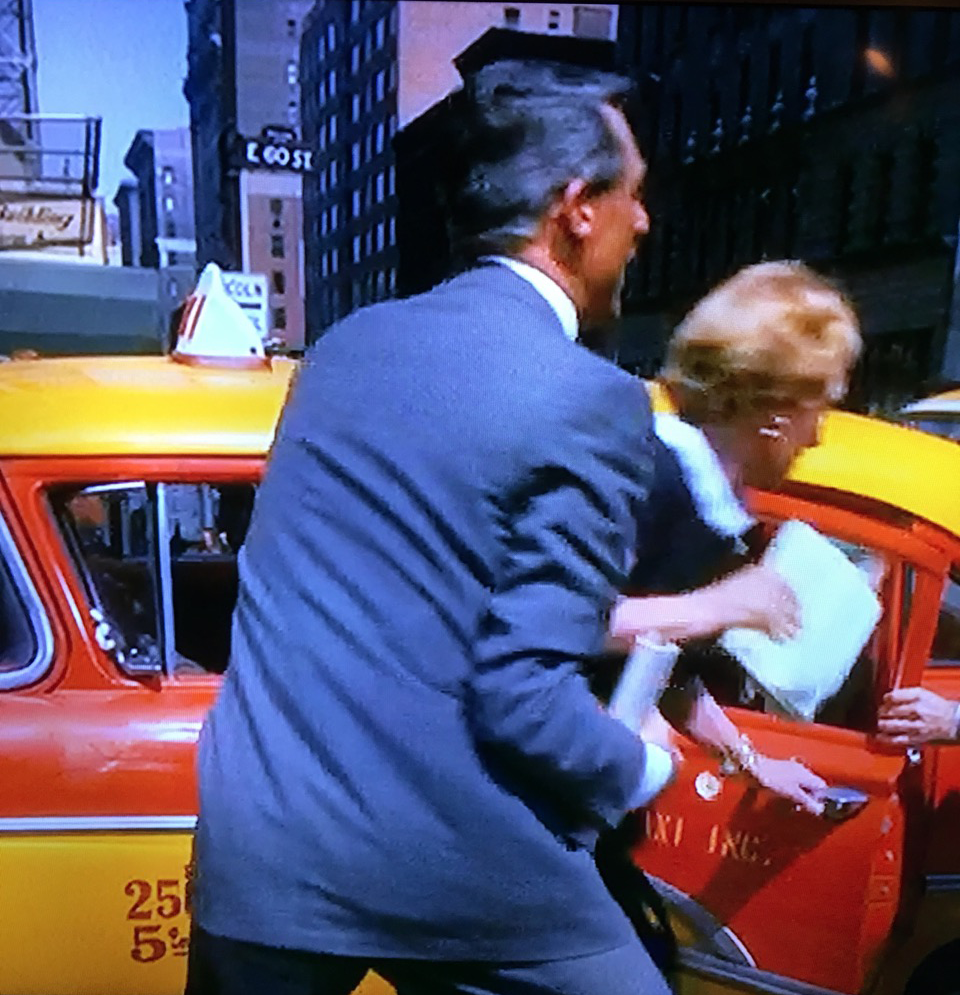 There is no vent on the suit, and the material falls straight down at the back, a nod perhaps to a US ‘sack’ cut, pioneered by Brooks Brothers in the 1950s. 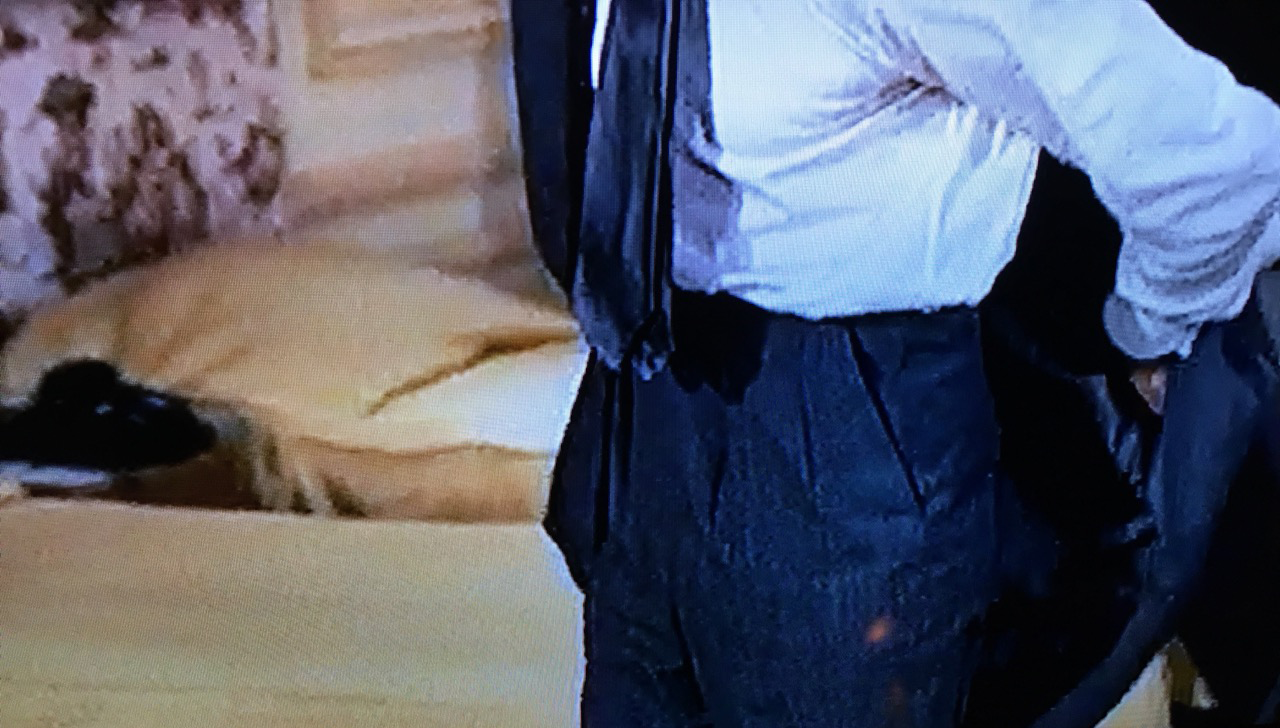 The trousers have side strap adjusters with metal buckles situated just to the rear of the side. A long extension band is used, as found on most bespoke trousers not made for belt loops 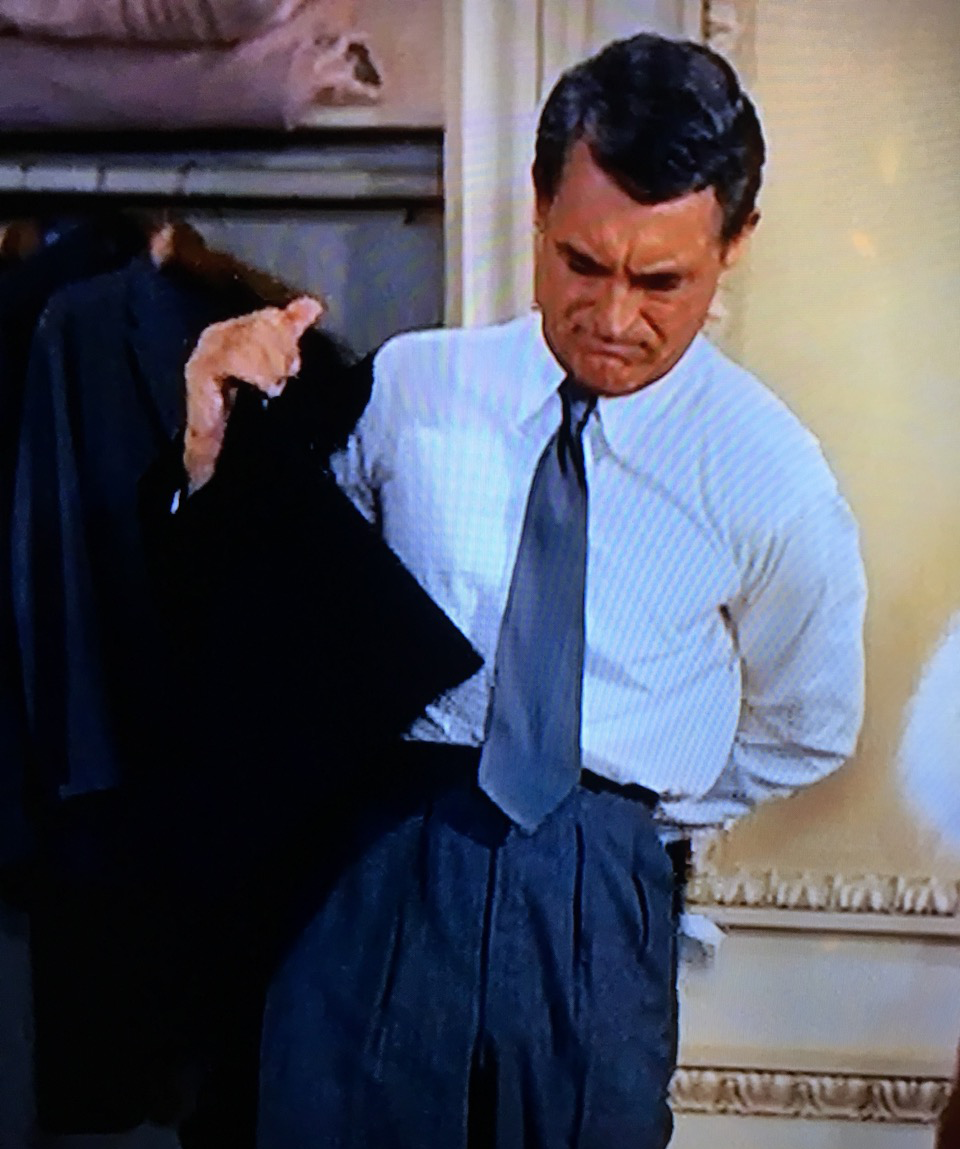 The trousers have four pleats, forward facing, in the English style. 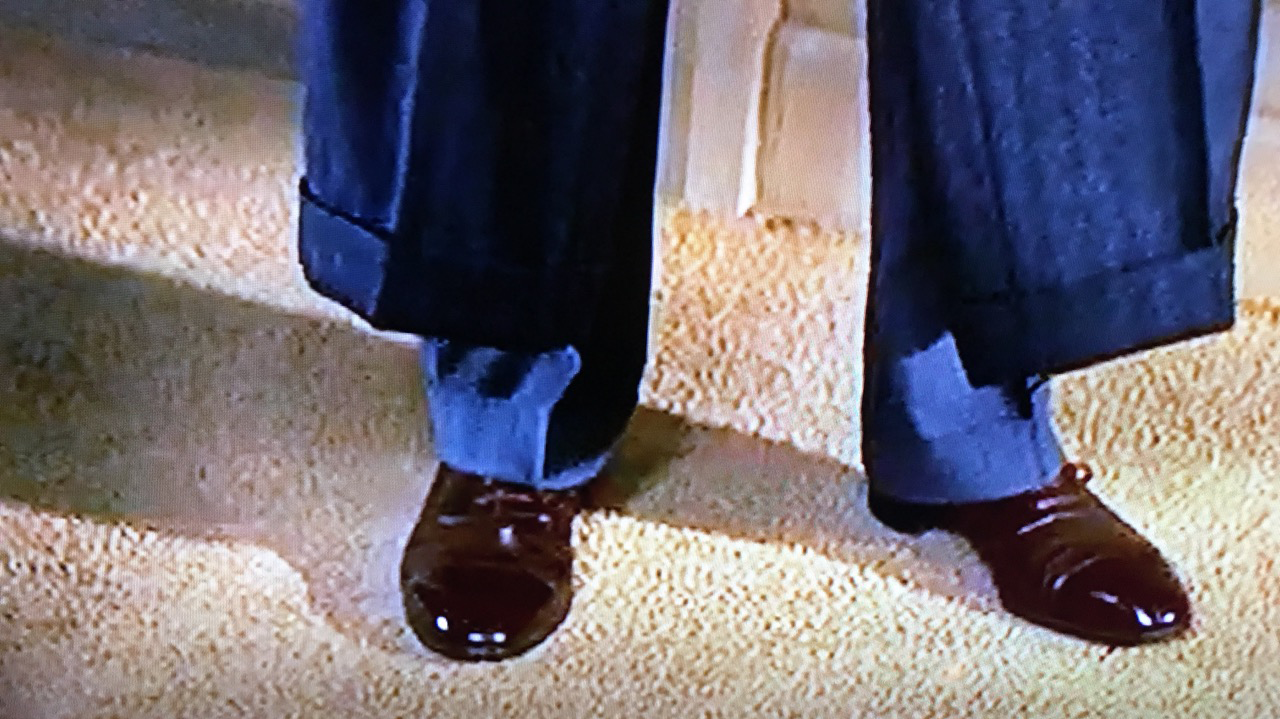 There’s only one scene where I spotted that the trousers are turn-ups – it’s where he measured George Kaplan’s trousers against his own in the hotel room. The turn-ups look relatively tall, around  2 inches.

In the third instalment of the NBNW suit blog series, I’ll be covering ‘the fitting’ stage of the suit.

A video documentary of the full process is also coming soon.